Previously, I introduced Marjorie Merriweather Post as a collector by providing a brief synopsis of her life. Now, I would like to present some highlights of her collection that I feel encapsulates its beauty and dimension, while providing some critique. All of which can be seen in her Entry Hall.

From the top of the stairs looking down to the front hall main wall.

In the Entry Hall, Russian Imperial art and French decorative art is not in juxtaposition, as some may assume. Rather, they come together in a seamless display of wealth, power, and superb taste. The apex of the entry hall is, of course, the massive portrait of Catherine the Great  painted in 1788 by Dmitry Levitsky. In this portrait there is a quote that reads “She finishes what has begun.” This is in reference to Catherine the Great finishing Peter the Great’s mission to Westernize Russia. Catherine enhanced the arts and sciences for the benefit of Russia- opening schools, and bringing in European fashion and culture to her court. Both Marjorie Merriweather Post and Catherine the Great collected and commissioned French art, however, much of Marjorie’s collection was once Catherine’s. In an interesting documentary the two women are even compared due to their similar tastes, wealth, and influence. By having this portrait in the front hall, it makes a statement about Post as a collector. It was Catherine the Great who began the Hermitage Museum out of her personal collection, and now a portrait of hers sits in the Entry Hall of Marjorie Merriweather Post’s Hillwood Estate.

There were two less obvious pieces in the Entry Hall that drew me in. In the coat closet is a soft yet striking portrait of a partially nude woman draped in billowing black fabric. Then, below the grand Portrait of Catherine the Great is a stunning detailed and painterly portrait of Tsarina Alexandra Feodorovna. The former was painted by Ilya Repin and the latter by William-Adolphe Bouguereau. However, it took me until I got home and looked it up that I discovered that those were the masters were behind these pieces. There lays my only qualm, nearly nothing was labeled and not every piece had its information in the pamphlet. I imagine it is because wall text and labels would make her estate feel less personal and intimate, both of which are the desired experience the Hillwood wants to provide. (I imagine Post had her reasons for displaying a Bouguereau in a closet then instructed that her estate remained as she left it postmortem). The names of Ilya Repin and William-Adolphe Bouguereau carry much weight, especially to the Russian and French. Therefore, I would have expected a little more attention brought to them.  In spite of that, the mystery leads people to look it up on their website (like myself), or go on a guided tour in the future. At any rate, both of these men are a testament to her as a collector. 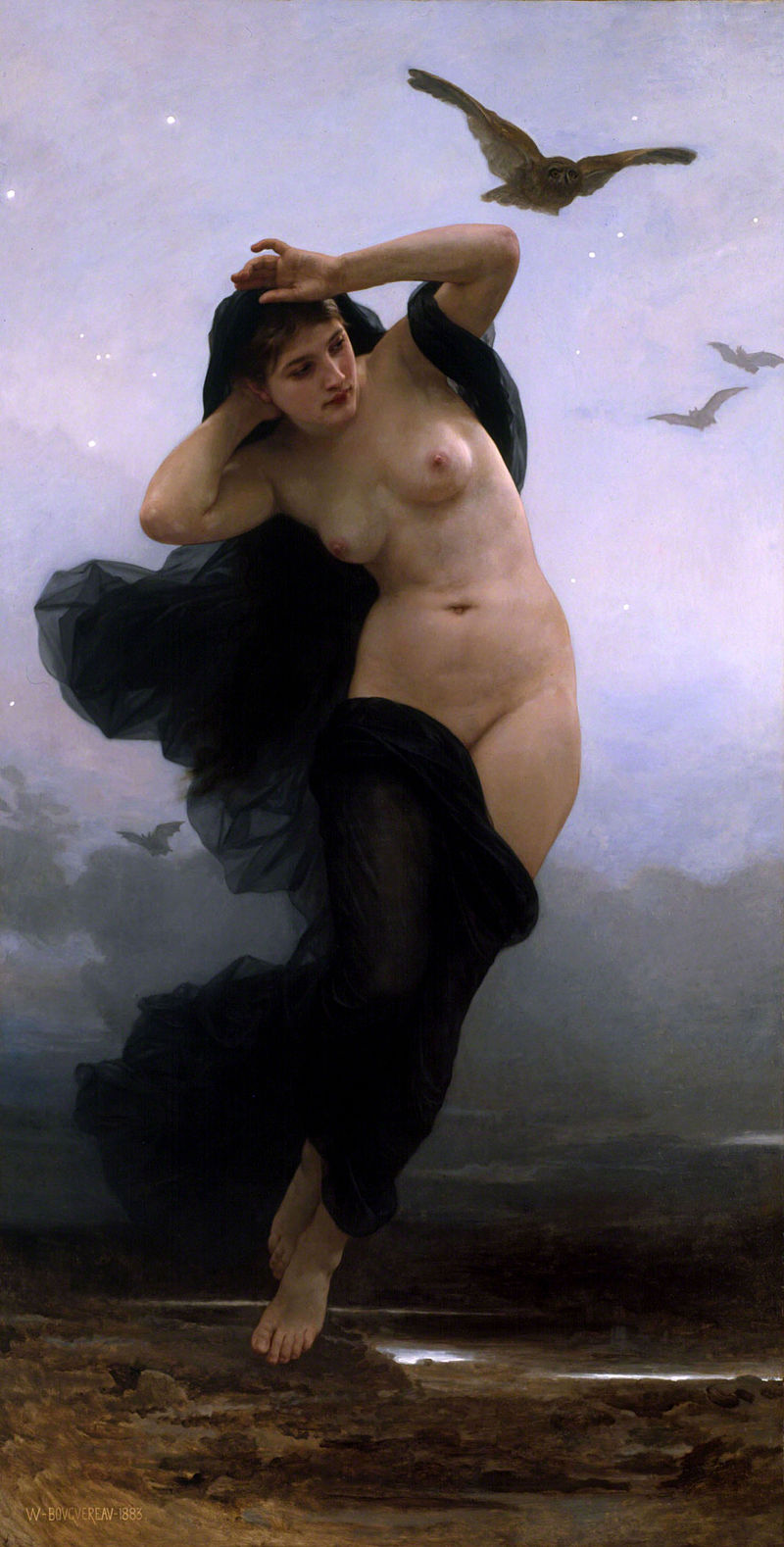 Night (La Nuit) by William-Adolphe Bouguereau, painted in 1883, (above) is on display in the men’s coat closet. The contrast of the milky soft skin of the woman and the black light fabric caught my eye. I figured someone extremely well trained painted it due to the impeccable quality of the skin’s tone, texture, and softness. So, I made a mental note to look it up in their collection and discovered a French 19th century master, Bouguereau, painted it. Bouguereau spent his lifetime featured in the Paris Salon. Thus, this is a testament to Post’s collection that she owns his work because he is also in the Musee D’Orsay, and the Metropolitan Museum of Art. Bouguereau is most known for his paintings of nude women, classical subjects, and mythological scenes. More attention brought to this piece would broaden the scope of her collection significantly. I would argue that Bouguereau is a more recognizable name to a Western audience due to his fame and the emphasis in most art history classes, than some of the names that were mentioned. Even myself, didn’t recognize many of the names were in the pamphlet. I believe a broader audience of art aficionados would come to the Hillwood, if they knew a French master was featured. While seeing a Bouguereau was a pleasant surprise, realizing I stood in front of an Ilya Repin painting had me floored.

Beneath the Portrait of Catherine the Great is another portrait of Russian royalty. What drew me in wast the beautiful woman wearing white, ivory, and gold against a black background. Again, I had no idea who the artist was or a definite idea of who the subject was. Once home, I realized I had guessed correctly, it was a portrait of Tsarina Alexandra Feodorovna, however, I was not expecting the artist to be the Ilya Repin. Repin is easily one of the most-well known Russian artists and is the most renowned Russian artist of the 19th century. He is so revered in Russia he even has a statue in Moscow. He is also one of my personal favorite artists. However, I can confidently say there is not much of his art outside of Russia, his work in mainly in the Tretyakov Gallery and the State Russian Museum. Repin is known for his realist works like Barge Hauler on the Volga 1873, and Ivan the Terrible and His Son Ivan 1885. What also makes Ilya Repin an ideal fit for the collection of Post, he was the one of first Russian artists, painting Russian subjects, to receive praise from France. He even got to study in France and maintained relationships there. Repin’s name carries significance to a Russian audience, and should really be a name American art history audiences recognize. Again, I would have expected attention brought to this piece. Further, because of his relationship with France he represents a collision of Russia with France, similar to Post’s collection.

Recently, in my search for Russian art, I discovered the Hillwood– Estate, Museum & Gardens created by the fabulous Marjorie Merriweather Post (below). Post was an heiress, businesswoman, philanthropist, and art collector. Her collection is primarily 18th century French art and furnishing and Russian Imperial art, the most comprehensive outside of Russia. Between her being a strong woman of history and our shared affinity for Russian art, I quickly made plans to visit her estate in Northwest DC. I was blown away by what had been practically in my backyard this whole time. I absorbed as much as I could that afternoon and was left inspired. Therefore, this experience must be presented in two parts. First, I would like to introduce Marjorie Merriweather Post as a collector, and later talk about her exquisite collection.

Post inherited $20 million from her father, the founder of the Postum Cereal Company, after her parents died when she was only 27. In the 1920’s she lived in New York and married Edward Bennett Close. With her wealth she was able to furnish their home after 18th century France and the neoclassical style of Louis XVI. The excellent craftsmanship and elegance she surrounded herself with exposed her to art collecting and high taste. This  also led her to the British art dealer Sir Joseph Duveen, who worked with the likes of Henry Frick and John Rockefeller. He helped Post create a name for herself as a collector by purchasing furniture and tapestries. Below is a picture from her French Drawing Room, designed after the in vogue style previously mentioned of the early 20th century. In the center is a portrait painting of Empress Eugenie by Franz Xaver Winterhalter in 1857.

Her second husband was Edward Hutton. Together, they turned Post Cereal Company into General Foods with her decision to invest in the frozen food business. In the 1920s she also began to collect Sevres porcelain (above, flanking the portrait), more French furniture, jeweled objects, and Faberge (pictured below).

Marjorie’s third husband was Joseph E. Davies, the ambassador to the Soviet Union. This marriage brought her to Moscow, where they lived in the embassy for over a year. During this time, the 1930’s, the Soviet government was still selling off the treasures of Imperial Russian. In storerooms and commission shops, Marjorie was able to buy her Imperial fine and decorative arts. After that year, she continued to pursue Russian art as this was what started her passion for it. 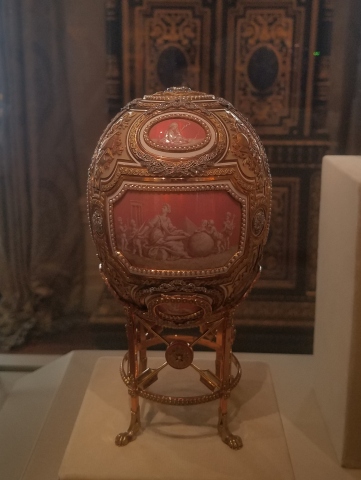 Above, is the Catherine the Great Easter Egg, 1914 and an example of a piece she bought while in the Soviet Union. Currently, it is in the Icon Room among other treasure of the Russian Orthodox Church. According to the lovely pamphlet passed out to the visitors of the Hillwood, this egg was given from Nicholas II to his mother Maria Fedorovna in 1914, as a part of the family’s Easter tradition. It’s named after Catherine the Great due to it’s cameo scene of the arts and sciences, something near to Catherine’s heart, and the long lost miniature figure of Catherine that used to be inside.

After she divorced Davies in 1955, she purchases the Hillwood and lived out her life there. Once she bought the mansion, Post had it completely redesigned to function as both a home for her and an appropriate place to house her collections. She also continued to be a part of her business and continued to be a top hostess for the DC elite. Marjorie Merriweather Post died in 1973, however, she granted her collection and home to the public. Besides the Mansion, there is an Art Research Library, Cafe, Pet Cemetery, Friendship Walk (a path dedicated by her friends), a Japanese-Style Garden, and other gardens. One can only imagine how beautiful it must all look in the spring. Now, everyone can enjoy her fabulous home and collection. I highly recommend visiting if you are in the DC area. The Hillwood is approximately 2 hours from the Lazare Gallery! (<- remember to call to make an appointment to view and/ or buy the works of Nikita Fedosov)